The TQC Pencil Hardness Test according Wolff Wilborn provides a simple method to test the scratch hardness of coatings. In this test, pencils in a range of 6B to 8H hardness-grade are used. The pencil is moved to scratch over the surface under a 45° angle with constant pressure. Then an optical assessment is carried out to see which pencil hardness damages the surface. Delivered with a set of 20 Koh-i-noor pencils and a pencil sharpener.

The models differ in load on the pencil tip (in grams). This differs per standard. See also ‘Order Information’.

The purpose of scratch hardness tests is to determine the resistance of coating materials or lacquers to scratch effects on the surface. This test is of particular value for furniture or vehicle lacquers but is also a useful aid in the development of synthetic resins or other film-forming materials.

Generally, scratch hardness is measured by moving a sharp object under a known pressure over the test surface. The result may either be the value of the pressure required to scratch through the test material if a scratching tool of constant hardness is used, or the hardness of the scratching tool is varied while constant 750 g pressure is applied. 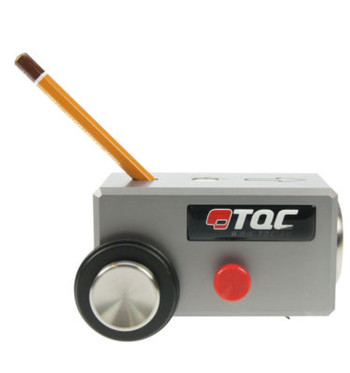